The SpinPro R300; not your everyday Spinning Disc Reactor 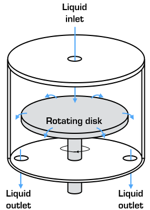 The SpinPro reactor is based on patented rotor-stator spinning disc technology. Traditionally, two types of spinning disc reactors are known in chemical industry. The first, the thin film spinning disc reactor consists of a rotating disk in a large collection tank. Liquid is fed on top of the disc near the axis of rotation and flows outwards in the form of a thin film. The liquid then falls to the floor of the encasing tank from which it is collected at the bottom. The surface area available for mass transfer is roughly equal to the surface area of the disc, and a moderate amount of shear in the liquid film enhances mass transfer. The residence time in the reactor does greatly depend on the spinning rate of the disc, so that higher shear comes at the cost of shorter residence times. 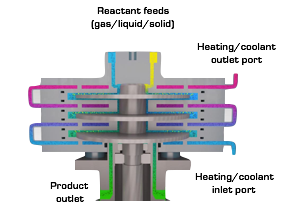 The SpinPro reactor is another type of spinning disc reactor; namely of the rotor-stator type. In this configuration, a rotating disc is enclosed in a very narrow cylindrical encasing. Typically, the distance between the rotor and the stator is a millimetre, thus much smaller than the clearance between the rotor and the housing in the thin film spinning disc reactor. This leads to significantly larger shear rates in the gasses and liquids, which in turn leads to a much larger interfacial area available for mass transfer and a higher degree of turbulence and micro-mixing. In addition, the volume of the reactor is completely filled with liquid. The residence time in the reactor can thus be controlled independently from the disc speed, allowing a powerful combination of introducing high shear without losing residence time. Finally, the incorporation of cooling and heating layers parallel to and in close proximity of the disc in combination with the high shear an turbulence also allows for near instantaneous addition and removal of heat.